The city of Chetumal was described as a “disaster”, and hundreds of people were left homeless.[27] More than 5,000 people in the city lost their belongings as a result of the storm. Officials in the area estimated that damage in Chetumal alone reached $8 million (1974 USD).[28]Throughout the Yucatán Peninsula, Hurricane Carmen claimed four lives and wrought $10 million (1974 USD) in damage.[29]

Hurricane Carmen was the most intense tropical cyclone of the 1974 Atlantic hurricane season. A destructive and widespread storm, Carmen originated as a tropical disturbance that emerged from Africa toward the end of August. The disturbance traveled westward, spawning a tropical depression east of the Lesser Antilles on August 29. The storm moved through the Caribbean Sea, and in an environment conducive to intensification, it quickly strengthened to its initial peak intensity as a Category 4 hurricane on the Saffir–Simpson Hurricane Scale. Carmen moved ashore on the Yucatán Peninsula, where, despite striking a sparsely populated region, it caused significant crop damage and killed several people. Before the storm’s arrival, officials had set up several evacuation centers, and many residents had moved to higher ground.

Upon entering the Gulf of Mexico, Carmen turned northward and re-intensified as it approached the United States. Initially threatening the major city of New Orleans, it veered westward and made landfall on the marshland of southern Louisiana, eventually dissipating over eastern Texas on September 10. Tropical cyclone watches and warnings had been issued for the storm, and approximately 100,000 residents left their homes and sought shelter. Damage was lighter than first feared, but the sugar industry suffered substantial losses. Throughout its course, the hurricane killed 8 people and caused $162 million in damage. Due to the severity of the storm, the name Carmen was retired from the list of Atlantic tropical cyclone names. 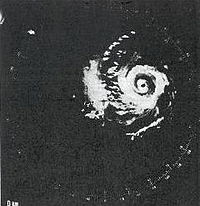 Radar image of Hurricane Carmen near landfall on September 2

Although Carmen made landfall as a powerful Category 4 hurricane, it caused significantly less damage than anticipated because it struck a sparsely populated region. However, torrential rainfall from the storm inundated farmland across the region, ruining rice crops. The fishing industry also sustained major losses.

Communication with the hardest hit regions was lost following Carmen’s passage; however, early reports stated that at least five people were injured.[11] Several days later, officials in Mexico confirmed that three people had been killed by the storm.

The city of Chetumal was described as a “disaster”, and hundreds of people were left homeless.[27] More than 5,000 people in the city lost their belongings as a result of the storm. Officials in the area estimated that damage in Chetumal alone reached $8 million (1974 USD).[28]Throughout the Yucatán Peninsula, Hurricane Carmen claimed four lives and wrought $10 million (1974 USD) in damage.[29]

Following Carmen’s passage, officials feared the worst for an area of 1,000 mi2 (2,590 km2) where communication was lost in Belize. A reconnaissance task force was sent out from Belize City the day after Carmen made landfall to assist any residents stranded by the storm.[30]One person was killed off the coast of Belize after being washed off his boat by large swells produced by Carmen. Three other fishermen were listed as missing following similar incidents. Thousands of people moved from coastal areas inland to escape the storm. Crop damage in the country was reportedly severe.[31]

🍃❤️💦 With places like these, it´s impossible not craving for a new visit to rediscover this paradise in Riviera Maya! 😊

🧼❤️🇲🇽 Feel safe enjoying your favorite food in our restaurants thanks to our 360 ° Xafety protocol.

🤓🇲🇽 Are you planning to visit us soon? So, read our #BlogXcaret where we share everything you need to know to enjoy your visit. ⬇⬇⬇⬇